Anyone watched Magi yet? owo

Well, Magi is a “One Thousand Nights” themed Japanese Manga which was then adapted into an anime. [The anime’s somewhat as good as the manga.owo~]

Summary : Aladdin, the primary protagonist, is travelling a in desert land, with a magic flute that summons a djinn named Ugo.[basically a djinn is something like a genie..] The djinn has a huge and muscular body, but cannot remove his head from the flute, giving him a headless appearance and frequently causing even people he is trying to rescue to mistake him for a monster.

The two meet Alibaba, a young man who is trying to get rich, and realizes that Ugo would be a powerful ally to explore a nearby treasure-filled dungeons. As they adventure together, they become true friends, along with Morgiana, a slave girl from a distant land that they free from her master. The three encounter other djinn and find hints that they may be destined to decide who will rule the world and Aladdin, as to who he really is. 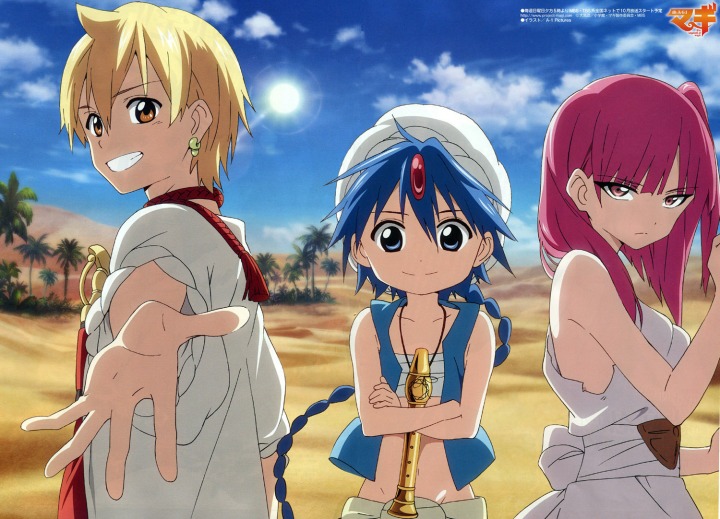 This anime’s not bad..has a good plot and the characters are…well, awesome. owo..I particularly like Morgiana cause she has amazing strength [ in which you’ll be able to learn from the later episodes.]

I don’t wanna spoil anyone who hasn’t watched the anime yet..owo [I don’t like spoiling people, including myself.o.o]

Was pretty hard finding the opening…[with all the copyright problems going on..o___o]

But anyways, its said that in Spring 2013, Japan is going to release the new Magi – Labyrinth of Magic on 3DS…owo…

One thought on “Magi – Labyrinth of Magic”