Recently completed some anime..eeehehehehes owo my anime pace is kinda slow these days… 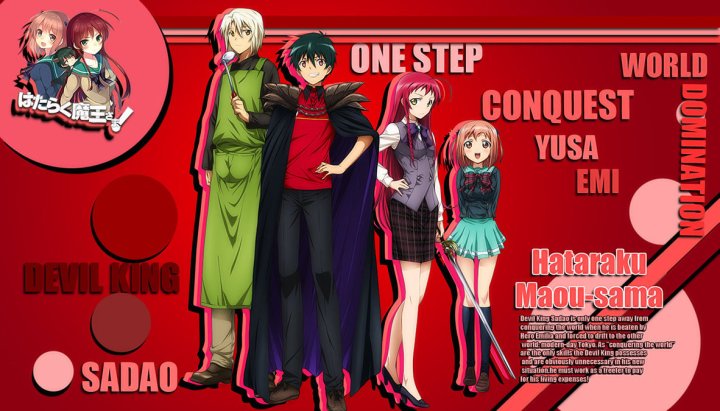 Hataraku Maou-sama! had a pretty nice plot involving both a fantasy & realistic setting. It was probably one of the few anime which was really worth the wait and the watch. XD

In another dimension, the Maou [Dark Lord] Satan and his forces of evil are defeated by the Yuusha [Hero] Emilia and her armies. Satan and his Demon general Alciel are forced to flee through a portal which drops them off in modern day Japan. With their magic slowly depleting in an unfamiliar world, they are forced to act as normal human beings in order to survive. As “conquering the world” are the only skills the Devil King possesses—and are obviously unnecessary in his new situation—he must work as a freeter to pay for his living expenses! -Adapted from Hataraku Maou-sama! wikia.- 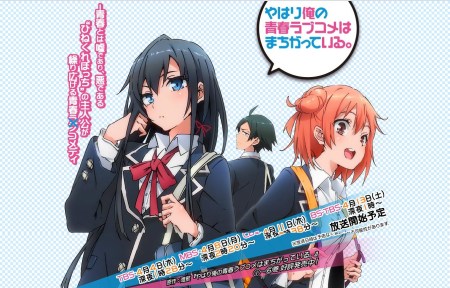 Yahari ore no Seishun Love Come wa Machigatteru. A rom-com anime which surprisingly does not really involve too much on love, this anime revolves around Hikigaya Hachiman, an anti-social high school student with his distorted and negative perception of high school life due to his lack of social interaction with the people around him.When asked for a reflection of his high school years, he replies with words such as youth being a waste of time etcetc.  A teacher then gets Hachiman to join the volunteer service club, which happens to have the school’s prettiest girl, Yukinoshita Yukino. However, even popular people have their own problems. Thus, the story goes on with the two of them in the volunteer service club lending a hand to those who need it.

Well, firstly what I like about this anime is that the main characters, Yukinoshita Yukino and Hikigaya Hachiman refute each other’s opinions easily, as if playing high speed table tennis..such anime involves a lot of talking and sarcasm XD which is probably one of my favourite points about it owo. Secondly, the negative statements in this anime isn’t entirely true, yet it isn’t entirely false either. Hikigaya’s quotes can be easily related with many of the dejected youths out there…sad to say, but true.

Well, thats for now :X shall go on with updating some other pages now..eeehehehehes owo~